Is the German Energiwende realistic and green?

Even before the election, Germany had taken huge steps towards the green transition; the so-called “Energiewende” in Germany had started. In 2011, former German Chancellor, Angela Merkel (CDU), announced a phasing out of Germany’s nuclear power plants. And Germany does not lack ambitions; by the end of 2022, the last three of Germany’s nuclear power plants will be shut down, the Germans will reduce their CO2 emissions by 60% before 2030, and they have decided to shut down the last coal-fired power plant by 2038 at the latest. Finally, the new government wants to have 80% renewable electricity by 2030 compared to the target of 65% from the previous government.

Driving through Germany on the Autobahn, one can easily see what is likely to replace nuclear power: wind turbines. As far as the eyes can see across the German landscape, they see wind turbine after wind turbine of a significant size. 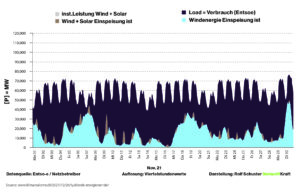 How will they keep the lights on in Germany?

Providing the Germans with enough power from wind and solar sources to cover their current energy consumption would require at least a tripling of the current capacity from wind and solar. That might sound like a straightforward solution, but the main issue with wind and solar energy will always be the intermittency of these energy sources, as there will never be a guarantee of the amount of sun and wind that we receive each day. We simply need to be able to generate power from different sources of energy to cover our consumption every minute and to avoid an electricity gap.

And then, we have not even talked about “NIMBY” (Not In My Back Yard) yet. We want to be oh so green as long as it is not interfering with our daily lives – or the view from our backyards. In Germany, a greener government has been elected, but at the same time, the protests against the gigantic wind turbines that keep popping up around the German landscape just get louder and louder. This is due to the noise levels from turbines that disturb people’s sleep and the wings that disturb the views from people’s houses. Many Germans are simply against the Energiewende taking place in their backyards.

Also, let’s not forget that despite the constant focus on going greener, our net consumption of energy has continuously increased:

Wind turbines are part of the solution, but just as we need to solve the need for multiple sources of energy, including nuclear power, we also need to consider how and where wind turbines are manufactured, decommissioned and ultimately disposed of. Wind turbines are made, in part, from oil, and solar panels are made using coal. At present, China manufactures a large amount of the world’s supply of solar panels and wind turbines, but in real terms, this means that we have exported our CO2 emissions to a country with cheaper production. When the life of a wind turbine comes to an end, they are buried at so-called ‘wind turbine graveyards’, with no solution on how to get rid of them for good. In particular, the wings, which consist of fibreglass that does not burn, and so are difficult to dispose of.

So, are wind turbines providing a truly a green-to-green solution? No. One possible solution is to focus on reinvigorating and extending the life of existing wind turbines, rather than building them from scratch. This means less, if any, opposition from locals who are accustomed to the view and noise, zero carbon being expended because they are already in place, and additional time to invest in research that solves how to decommission the turbines in the greenest possible way.